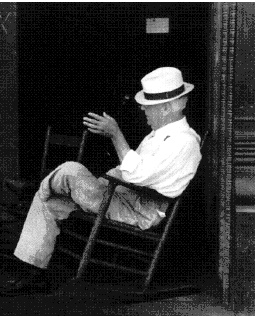 Posted at 16:49h in Inspiration by Kevin

Old people from Mississippi tell the best stories. As I am not long away from being one myself, I will tell one that was told to me when I was about 20.

This old man told me how he loved birds. And that when he retired he went about making his yard a haven for them. He put up all sorts of bird feeders and bird baths. He even planted special plants and flowers to attract the birds. Sure enough all this worked and he was able to spend hours sitting on his back porch with binoculars watching the birds. He had a couple of friends who would come visit in order to enjoy them as well.

He was completely happy with his birds. But then he began to notice that squirrels were getting into the bird feeders and eating a good bit of the bird seed he was buying. They also spread the seeds all over his lawn causing “weeds” to sprout up. He became obsessed with finding a way to stop the squirrels from costing him time and money.

He bought special bird feeders that guaranteed no squirrels could steal his birdseed. But they didn’t work. He worried about it all the time. He would make squirrel traps. He would sit on his back porch with a 22 and shoot them, hoping to keep others frightened away. Nothing worked. He became grumpy and complained about them to anyone who would listen. Constantly he sought advice from others about his squirrel problem. His friends stopped coming by. He was broke from his anti squirrel schemes.

Finally, in disgust, he took down all his bird feeders. A couple of months later he was sitting on his back porch, alone, no birds, no friends. But he was saving money and had a beautiful lawn.

It wasn’t long before he put the bird feeders back up. He realized that even though he hated the thought of the squirrels stealing his birdseed from time to time. It was better than not having the birds. He even noticed that sometimes the seeds the squirrels knocked about on his lawn produced pretty flowers. He was less grumpy and his friends started coming back around.

He said to me “In life there’s always gonna be squirrels, just feed the birds anyway.”